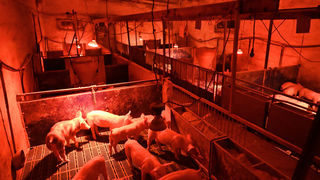 Each year, more than 70 billion animals on land, are killed for food. 1.5 billion of them are pigs. It is estimated that over 70% of these animals grow up in farms. Their living conditions are horrible, and the after effects caused by their breeding, deeply harm the environment, as well as human health. Driven by the fact that there is no data concerning Greek pig farms and that everyone is under the impression that pigs enjoy a wonderful life till the time they are slaughtered, APA decided to conduct an investigation. Its aim is to reveal the truth, so everybody will know what lies on their plate…

The Greek pig farms’ investigation was assigned to a team that specializes in such endeavors and it was carried out in March 2022. Its preparation took place during January and February. We visited 6 farms in total. We were given 2 hours of high-quality video footage and 178 photos. The team, which has completed dozens of such researches in other European countries, told us that the situation in these Greek farms were among the worst they had ever seen. 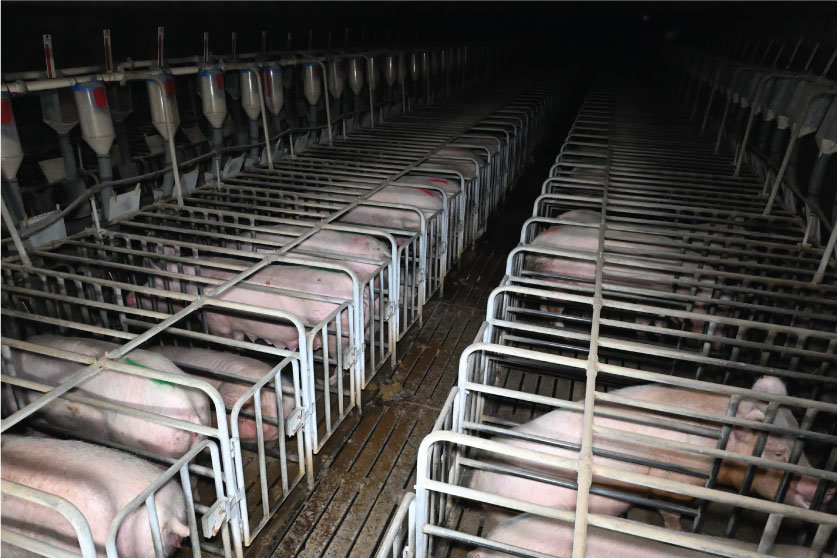 THE FINDINGSPig mothers and pigletsThe living conditions in the farms were horrible. The most abusive situations though, had to do with the pig mothers.  As it is accustomed to in most of the farms around the world, pig mothers are forced to live in the so-called "birth chambers" for about three months, until their youngs are ready to be transported to the pre-fattening and fattening facilities, where they are prepared for slaughter, during the 5th or the 6th month of their life. In the delivery rooms, that look like torture cages, pig mothers cannot move or turn. They can only stand and lie down, stuck between railings to feed their young. In the farms visited by our research team, there are dead piglets lying down. Some of them are in the… dying process. We can only imagine the pain of their mothers who stand almost next to them and  yet they cannot comfort them during the last moments of their short but so torturous life.

In the cases of babies who survived, it was observed that their tails and teeth had been cut off, a process that takes place hours after birth, without anesthesia. This is due to the fact that "during breeding, cannibalism or aggression might be a side effect”. According to the European directive, the removal of a pig’s teeth and tail is prohibited. It should applied only if all other methods of reducing animal stress (such as improving their living conditions and reducing the number of pigs in the same cell) have been tried and failed. An even more painful practice is the castration of male pigs without anesthesia - "which is not indicated" - between the first and third week of their life. 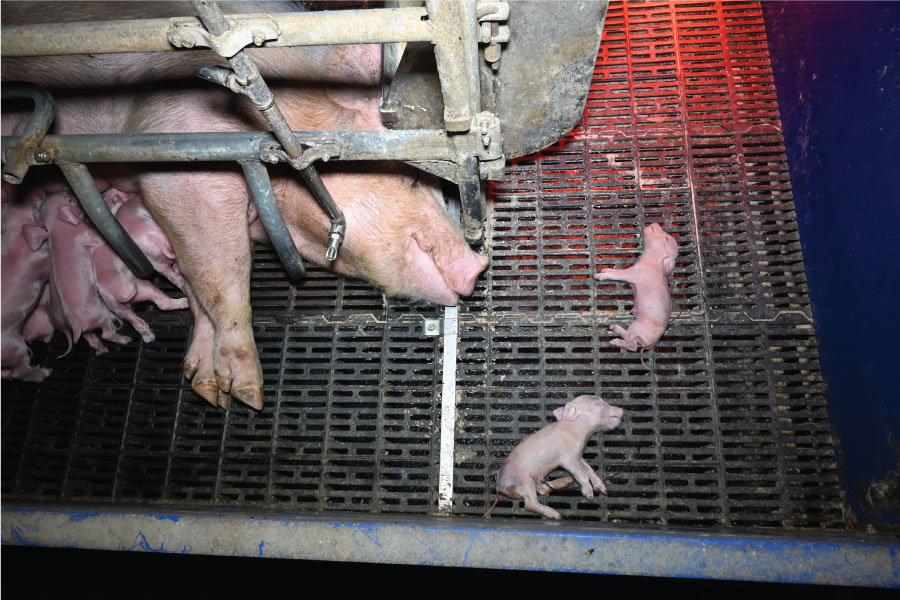 Older pigsSevere injuries, tumors and open wounds were observed in older pigs (+8 weeks). Particularly one of the animals recorded, had its legs paralyzed. In addition, behaviors that are the result of chronic animal stress are recorded. These behaviors include repetitive movements and sounds, constant jaw movement like chewing, chewing on the cells’ railings, and pregnant pigs trying to make a nest with non-existing hay. 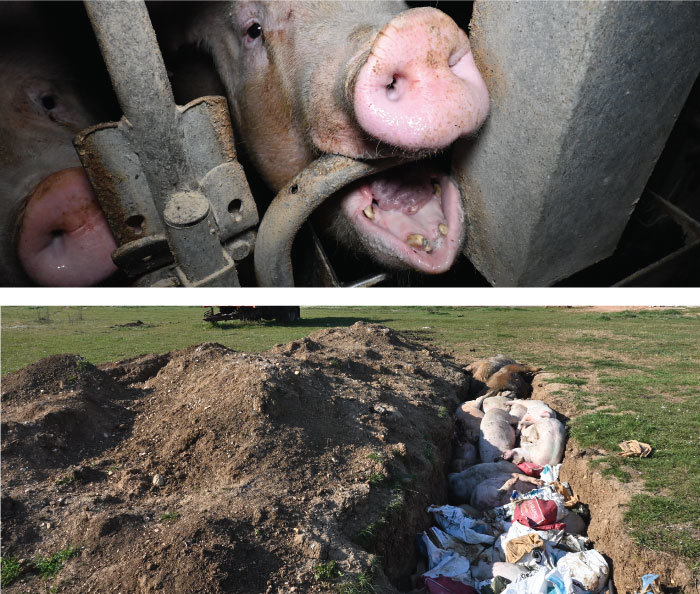 Facilities and Environment In the facilities that our team managed to penetrate, there were thick layers of feces, which indicates that they are not cleaned often. No hay or any “enrichment material” - proposed as an EU directive to reduce animal stress - were observed. Finally, a pit was found in one of the farms, in which dozens of adult dead pigs and small piglets were thrown in plastic bags. Apart from the fact that animal burial is illegal (only burning is allowed), these pits were located next to a nearby stream. An indication of possible contamination of the water, posing a great danger to the inhabitants and the natural environment.

Pigs that do not live in such farms have an average life expectancy of 15 years, while those living in farms 4 to 6 months. They are smart and protective and they have a place to rest and a different one to poop, that is why they suffer when they have to live on their own feces. They learn easily and quickly, they love to sleep nose to nose, and like every other animal, want to be free.We do not only deprive them of their freedom. We make sure that their lives is a living hell.

We are not utopians. We know that not everything will change overnight. But we are pragmatists! The conditions we observed in all the farms we visited were awful. Such images bring shame to everyone. The pig farming industry in Greece seems to be operating uncontrollably. It the State’s responsibility to ensure compliance with the law, both for the welfare of productive animals and for the protection of the environment; and this must be done immediately!

Watch the full video of our research